The Green Standard Army was a quasi-ethnic Chinese Force, first established by The Ming Dynasty in the 15th Century AD. They were akin to a form of provincial Police and Frontier Force (used to augment The Imperial Army, when needed). However, after the fall of The Ming’s to The Qing Dynasty (1645), most of The Green Army readily switched over. Still used to support The Regular Army, The Green Army fought in most of The Chinese National Battles from 1645 to 1765. Afterwards, with the slow establishment of more formal Frontier Forces and Policing agencies, the ‘’rough and tumble’’ Green’s were disbanded in the early 19th Century. Their Standard (Flag) was the traditional elongated triangle which featured a Green Field with a Golden Imperial Dragon. Both Green Infantry, Cavalry and (later) Artillery Units all used The Green Army Flag. 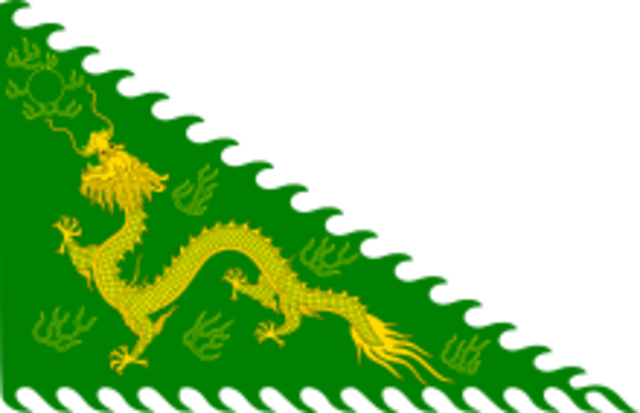