Mentioned many times in documents from The Qing Dynasty (16th Century), no actual example exists (and very few construction plans have survived). It was considered a ranged weapon that was circular in design. Ranging roughly 15 inches in diameter, the steel circular blade's interior had an attached blade. Likewise, the exterior of the ring featured spikes. The device was attached to a 15 foot chain or rope. In theory, The blade was thrown at the head of an enemy. If the blade encircled the head directly, a pull of the chain or rope would decapitate the victim. If not, the exterior spiking of the blade would inflict lethal damage as well. Historians have often debated it's existence. 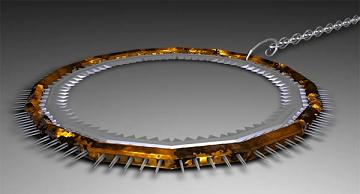