The Chinese developed gunpowder for military applications many centuries before Europe did. The invention (which was Fireworks used to delight an Emperor), quickly evolved into a practical military weapon. The first attempt in “rocket warfare”, was called The Fire Lance. These 10th  through 14th Centuries devices were spear-like devices which featured a bamboo tube. The tubes were often made of iron or brass. Gunpowder and shot could be poured into one end. Next, the lighting of a fuse (or slow match) was applied. The user than aimed the “stick” (at 12 to 15 feet long) - at the desired target and waited for the “launch”. Also primitive, it worked enough to continue onward with further developments.

The advent of a self-contained iron shell, which could be launched from a “Guide Stick” or platform would quickly be developed and deployed. Other examples featured “Fire Arrows” which placed a small charge at the end of an arrow. The charge was ignited and fired away quickly at it's intended target. Several seconds later the arrow exploded. Often fires could be started if an enemy was using wooded defensive structures for protection. The Chinese development of War Rockets would carry over to India (with The Mysorens) and eventually Europe (with The Congreve System). 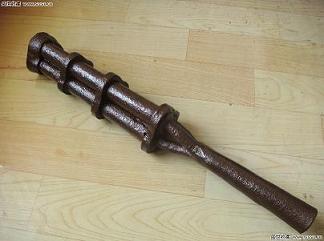