This ingenious 14th Century “weapon” was a “flying incendiary device”. Designed on the Glider Theory of flight, The Crow was made of light bamboo wood. Shaped like a large bird, The Crow was covered in a light paper or canvas. The Crow was painted black (and often decorated to resemble an actual Crow. Underneath the Crow's wings, however was the surprise. Attached, were twin explosive devices (lit by separate fuses). When activated, The Crow could be launched by simply throwing them skyward in a straight flight trajectory. Gliding on the wind on a “timed fuse”, the Crow would explode over an enemy position and catch fire (falling to the Earth). Multiple “flocks” could harass (at best), or start fires (and smoke). 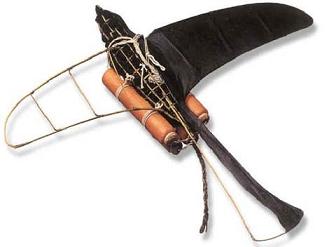