Developed around the 5th Century A.D. In China - The Dongwo Che has also been called one of the “first” Armored Vehicles comparable to The Tank of the early 20th Century. The Dongwo Chu was constructed as a standard wooden cart (with 4 wheels as opposed to 2). Heavy iron plating (1-inch thick) was placed around and inside the cart and bed. Wheels were made of wood and iron as well (and fitted with a ring of raised metal studs to assist in traction). Finally, a tent shaped, triangular top was installed (that slopped radically). This was to deflect rockets, shrapnel and bullets. Horses (covered in Armor), would drive the cart into battle. If the horse was killed, the soldiers inside could “button up” and fight from a “small Fort” if necessary. Often 5 to 10 of these Dongwu Che would be placed in lines or circles to create an “instant fighting position”. 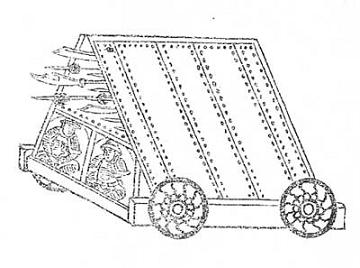