This ancient Chinese weapon was developed and used (briefly) in the 12th Century. Designed to be a hand-held weapons firing system, The Cone was constructed of bamboo wood and conical in shape. It featured a wide funnel opening into which wad placed as many as 40 iron arrows (or shafts). Inside The Cone was a black powder charge (possibly 10-pounds worth!) A vent opening on the outside (rear end) was installed - which was sealed with a removable plug. Again in theory, a "brave" Warrior would light The Cone with a slow fuse and point the weapon into the direction of an advancing enemy. Upon detonation, the shafts would fly out, traveling in various directions. The Cone no doubt misfired mire often than worked properly. Thankfully, Chinese gunpowder weapons were constantly advancing into more practical  (and somewhat safer) devices. 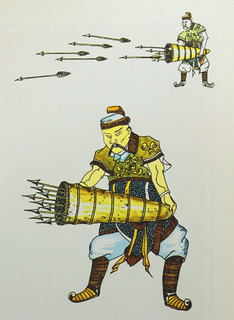