The name “Junk” is the Chinese language means “boat or ship”. The common type of all-purpose vessel, they were used as transport, small Merchant, fishing – just about anything that involved water transportation. However, The Combat Junk was a highly modified fighting vessel. Seen as early as the 3[sup]rd[/sup] Century A.D. - these ships were the “backbone” of The Chinese Navy well into the 16th Century. Ranging at 75 to 125 feet in length, the stood roughly at 20 feet tall (beam). They displace around 100 to 150 tons. Both Sail and Oar powered (15 to 20 Oarsmen) – the majority of the Main Deck was left empty (save the Castle Structure located at the rear). This gave maximum space for fighting. Archers and Spearmen were the primary defensive/offensive components for Combat Junks. After closing in on an enemy vessel, Boarding was the most used tactic. The placement of cannon and riflemen later only enhanced the capabilities of the Combat Junk. 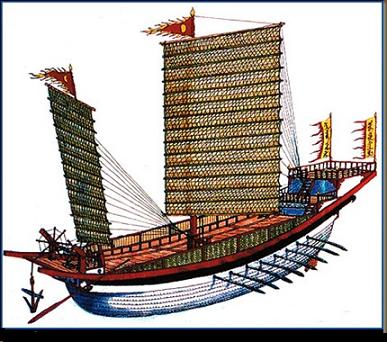