Development started in the 5th Century A.D. in The Han Dynasty. Similar in concept to the English Cog, The Castle Ship was MUCH larger. Some documents have the original 9 ship “Castle Fleet” at each ship being roughly 500 to 800 tons (displaced). Some were said to be 250 to 400 feet long! They stretched to an incredible 30 to 40 feet in height (beam). The innovation in keeping the ships “top right” was a clever design of width (25 to 35 feet wide) and “wings” - or stabilizers that extended from the Hull into the water. This created the ability to survive ramming and high winds. The “Castle Design” was somewhat different. The “super structure” of these ships could be 5 to 10 Decks (stacked one on top of the other). The top most deck was built into a Battlement (just as one would do with a Castle Keep or Defensive Tower). Large amount of Archers (traditional and “Fire” Arrows), as well as Spearmen were first attempts at defensive/offensive capabilities. Later, Catapult designs (on par with The Greek Triemes) were incorporated. Still later, riflemen and cannon were the choice. Castle Ships hold 800 to 1,000 soldiers. These “early battleships” were typified by the largest and most famous Castle Ship - “The Dragon”. Over 500 feet long and 50 feet high, “The Dragon” may have displaced over 1.200 tons. Capable of holding 1,100 soldiers - “The Dragon” was said to have had it's hull shaped as the mythical beast. The ship's Prow was said to be 20 feet high and weighed close to 500 pounds. Constructed to be a layered “Castle”, this ship a central “Fort” with 2 large Defensive “Turrets”. “The Dragon” was supposedly lost in a storm. 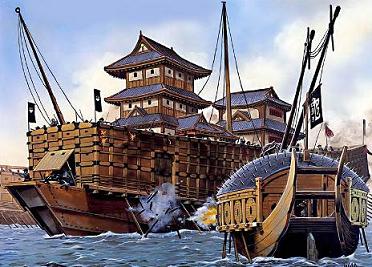