Although of Chinese design, The CAIC Z-10 Attack Helicopter was developed with the help of Kamov Rotorcraft in 2003. The first production Model followed in 2012. (120) Z-10s have been pressed into service with The Chinese Army. In addition to Ground Support, The Z-10 has Air to Air capabilities as well. There are (6) variants. 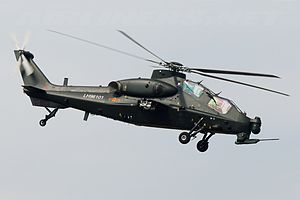