The rough English translation meaning “Open Arms”, The Chieu Hoi Program was an attempt by The American Military and Central Intelligence Agency, to entice Viet Cong Soldiers to defect from their “cause”, and fight with American Forces. It wad implemented in 1968. The Program utilized Psychological Warfare tactics which included the use of Audio/Radio broadcasts and the distribution of pamphlets in known Viet Cong Territory. Viet Cong Soldiers were encouraged to present these leaflets to any American Patrol. Given medical treatment and food, Chieu Hoi Soldiers were used to “teach” American Soldiers how to counter Viet Cong tactics and weapons – particularly their improvised explosive devices  (Booby Traps). Chieu Hoi Solders also served as Scouts. On most cases however , these defections were subterfuge. Most Viet Cong simply joined to gather intelligence and re-defected at their earliest possible convenience. The Program by and large was seen as a failure, with it stopping altogether in 1969-1970. 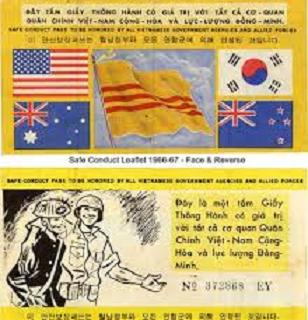