The ''Chi Rho'' is one of the oldest forms of Heraldic symbolism, used by Christianity. Originally derived from The Ancient Greek for the word ''Good'' (2nd Century BC), it would be adopted to identify the Greek word for ''Christos'' (the first two capitalized letters of Jesus Christ), or XP. By it's inception by Roman Emperor Constantine I in the 4th Century AD, as the identifier for The Roman Imperial Army (which was painted on all Scutum Shields as a result of His victory in 312 AD), The ''Chi Rho'' was used by the early Christian Church to identify itself. Later, the symbol (an X with a superimposed P), was found on many Family Heraldry Crests, especially during the various periods of The European Crusades in The Middle East from the 13th Century forward. It is still used (found) mostly in Catholic theology. 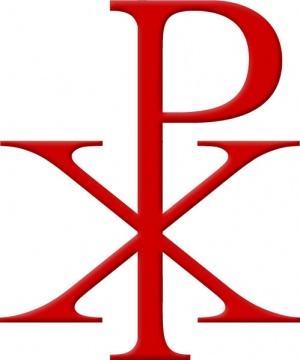