Perhaps of The The US Army's most vaunted Native American Warrior Enemies, was not The Sioux or Apache – but The Cheyenne. Originating from Minnesota, The Tribe made contact with European Culture in the 18th Century. They eventually migrated and settled in The Dakota Hills, allied with The Lakota Sioux.

When The US Army began to make and break Treaties which involved The Cheyenne being moved into Federally ''protected '' Reservations – The Nation resolved to fight back. (12) separate ''Military Tribes'' broke off and adopted an entirely militant sub-culture. A ''Spartan-like'' Society, these Warriors were augmented by a smaller, yet more fierce Warrior Caste known as The ''Dog Soldier''.

Dog Soldiers were chosen for their utter tenaciousness in hand to hand combat. They wore extremely stylized body paint that was either all White or Black. Bother were seen as ''spiritual colors''. Additionally, The ''Dog Soldiers'' wore a stylized all feather headdress. Made of hundreds of feathers, they too were died black and white. The headdress made The Warrior's head appear larger and as such more menacing.

Finally, Warriors wore a Cowl (underneath their headdress) which extended rearward as far as 6-feet.. This was hammered into the ground to the rear of the Warrior, via wooden spikes or by ''blessed'' ceremonial Arrows. This created a very small area of movement for the Warrior. He was thus only able to defend a few feet to his left or right flanks and front. He could not retreat

This practice gave the highly trained and disciplined Dog Soldiers the reputation of fighting with extreme fury to ''protect'' their ''space''. Axe, Club, Spear (Lance) and Knife. A Warrior had access to all traditional weapons for a fight. Dog Soldiers were taught not to ''die'' unless they had inflicted a maximum amount of damage to the most Enemy that ''dared'' approach. It was in this ''dogged'' determination that they earned their name.

The Dog Soldiers were seen (and used) as a Rear Guard or Fall Back option for a War Chief. Traditional mounted and foot Warriors were positioned to their Front to engage and draw in an Enemy to The Dog Soldiers.

During the last year of The American Civil War (1864-1865), The Cheyenne ''launched'' their offensive against US Forces in The West. Badly suffering from lack of re-supply of both materials and recruits due to The Civil War, Federal Forces most often lost their engagements with The Cheyenne. However after The War, a concerted effort was made to attack and subdue The Native American ''threat''. Large Tribal enclaves of Cheyenne were killed or re-patriated back into Reservation Life. However many of The Military Tribes joined The Sioux for the last final thrust of Native American power. That thrust would come to a peak at The Little Big Horn in 1876. 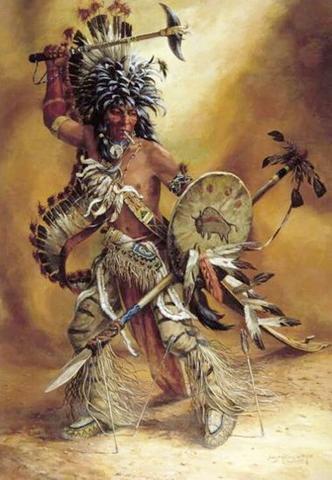