Further developing the theory of The Abatis system, these obstacles may go back as far as The Iron Age. A wooden cross-like bean (cut from a felled tree), they would have holes cut into them at alternating spaces. separate sharpened wooden pole were next installed into these cuts. Often equal in length, a spiked "roll" of 360 degrees was created. When placed in multiple rows, the Cheval de Frise became extremely effective against infantry (and especially cavalry) attacks. A portable "wall of spears", if you will. A major drawback of course was that the Cheval de Frise was made of wood, and could thus be set on fire. Often used to reinforce earthen breastworks (placed on top), enhanced one's offensive/defensive position. Another disadvantage was the time it took to construct them.  Cheval de Frise were popular enough to survive in warfare until the 19th Century! 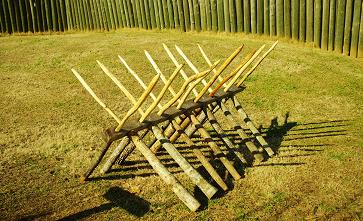