Chato, known by His People – The Chiricahua Apaches as Bidayaijsini, fought under War Leader Cochise against The US Army, during The Apache Wars of the 1870s. Having surrendered in 1872, Chato served as a US Army Scout. Seeing the deplorable conditions His People were subjected too, Chato deserted The Army and raised a Band of like-minded Chiricahua Warriors.

Chato and His Band raided Settlers and attacked Cavalry Patrols in The New Mexico Territory. Elusive and skilled Mountain Fighters, Chato earned a fearsome reputation. Many Settlers were massacured by Chato (or as The US Army attested to). After a particularly gruesome attack and killing on The McComas Family in 1883, the full weight of The US Army was brought to bear against Chato.

Although many Historians debate that Chato was responsible for The McComas Massacre (He had allied himself with Warchief Geronimo and his Apaches – who many have actually been responsible), Chato surrendered with Geronimo and His Band in 1886.

Chato would eventually lead a Peace Delegation to Washington DC from His Reservation near Fort Leavenworth, Kansas. Although ''awarded'' with a Silver Medal for His efforts to bring Peace between The Apache and US Government, Chato would be arrested for ''leaving His reservation without Authority). He would be deported to Fort Marion and later Fort Pickens in Florida (where he was imprisoned).

In 1894, Chato (and His Family) was allowed to re-settle at Fort Sill, Oklahoma before again moving in 1913 back to an Apache Reservation in New Mexico. In 1934, the great Apache War Leader Chato died in a vehicle accident, when His car lost control and crashed. 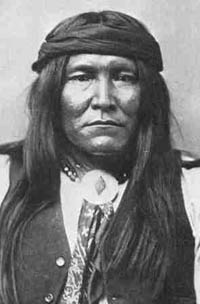