Located in Falaise, Basse-Normandie, France - this impressive fortification was the birthplace of William The Conqueror (1028). This structure may go back as far as the 8th Century (as a Motte and Bailey type system). By the time of William's birth, a stone structure was already in place. By the early 12th/13th Century, Falaise was already in a completed state. Built on a large flattened hilltop (chosen for maximum defense). The rear of the castle faced this drop to provide maximum protection against infantry attack. An outer defensive perimeter wall was incorporated into the hill to serve as it's support and to further aggravate siege equipment. Falaise features a large Donjon style structure, heavily fortified by double thick walls.

A large rounded defense Tower was attached for it's protection. It is speculated that Falaise may have had as many as 6 smaller defensive Towers attached to it's walls as well. Most interior structures inside it's Outer Bailey were constructed so as to be part of the perimeter defenses. During The Hundred Years War, Falaise was captured by King Henry I (England). Most of the renovations to Falaise gave it a distinctive "English" appearance from this point in it's history. Due to this, Falaise has several design features similar to Norwich and Portchester. Henry also expanded the Donjon by adding 2 additional Keeps.

Many of the English Normandy invasion plans were developed by him while staying at Falaise. The castle changed hands many times (English to French and back again). Through most of the 17th Century, Falaise sat in disrepair from disuse. By the 1870s, a large restoration project was began by the French Government. Although damaged in World War II by bombardment (and a nearby battle), the vast majority of the castle survived. It can be visited today. 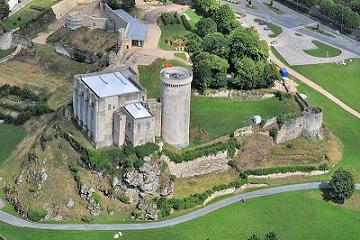