This fortification is located in Aisne, France. It was constructed in 1220 on a bluff - in an irregular trapezoid design. It's 4 circular defense Towers are built at the perimeter walls four primary joining parts. A massive Keep was constructed near the back 2 Towers. At one time, the Keep was considered the largest in Europe. Garrisoned many times throughout it's history, it saw some service during The Hundred Years War and various French succession rebellions.

An impressive defensive structure, it was severely damage by German forces in 1914 (upon their capture and garrisoning of Coucy). An estimated 28 tons of explosives were used to destroy the fortification. Much of the defensive walls and Towers were destroyed. It has been repaired and renovated many times over the last 50 to 80 years. Much of it's "former" appearance come to us from Period drawing and from German engineers (who had the good sense to record the Coucy prior to it's severe damage). It can be visited. 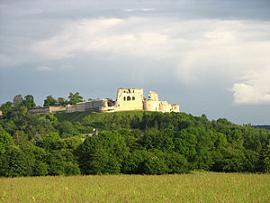