Chateau de Chateaubriant is an 11th Century Castle/Manor House constructed by French Aristocracy. The need to create a buffer between the warring Cities of Renne, Nantes and Angers, made it's construction imperative. It's other more peaceful purpose was to establish a trading focal point for the region. Originally thought to have been a wooden Motte and Bailey defensive system, Chateaubriant had 2 Moat systems built (one dry and one wet). The central massive Keep was finished around 1100.

As the castle structure developed, so did the nearby small village of Briant. The castle walls were extended to protect parts of the growing civilian populace. When Chateaubriant came under control of Dinan Royalty, they instituted many of their structure (Chateau de Dinan), into Chateaubriant's construction. The Dinan family opposed Francis I (Brittany). This would lead to The Mad War of 1486. Brittany would besiege Chateaubriant (which in turn would fall within a week). After the war, most damage was repaired.

During The French Renaissance, massive improvements were added (including a Manor House/Palace). It's "last" Noble owner, Prince Louis V - had to abandon Chateaubriant due to The French Revolution (fleeing to England). The structure and grounds served as a storehouse, police station, court and jail. In 1855, descendants of Louis V filed petition with the French Government for return of Chateaubriant. Returned in 1887, the family did not keep it long. Unable to maintain the massive coats of upkeep - they returned it to the French Government.

Major restorations began in the 1960s and again in the 2000s, to restore Chateaubriant back to it's former glory. It still served as Government offices up to 1971. It can be visited by the Public. 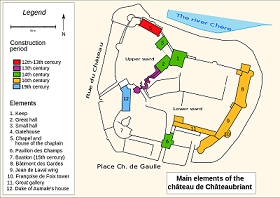