Born in 879 A.D. - Charles was the 3rd Son of King Louis (The Stammerer) of The Franks. He was of The Carolingian Dynastic Line. Half brother to Carloman, after Louis' death, many of the Kingdom's Nobility had not faith in the Rulership of Charles. It is unclear just why Charles was so unpopular. The Nobile's requested of Carloman that Charles The Fat be Ruler. Giving into the Nobles, Charles The Fat ruled for a very brief time (being deposed for his inability to control or stop the beginning's of The Viking incursions into Frankish territories).

Charles was eventually given the crown in 893 A.D. This too was the cause for factional displeasure. Although most Nobles gave into Charles, a small but vocal group loyal to Odo – another claimant, wished him as King. In 911, Norse King Rollo and his “hordes” were defeated by Charles forces first at Paris and then at Chartres. This gave Charles the diplomacy to negotiate for a protracted peace with The Vikings. Giving them large land tracts, the move was seen as a victory for Charles. Charles even was able to Christianize Rollo ( who was also given one of Charles daughters to marry).

At this time, the German King (a close ally of Charles), died. Without an heir, Charles was selected to be their King. Charles was able to increase the size of his Kingdom by 3 times. Showing too much (what was perceived as) favoritism to the German Nobility, caused Odo's faction back in Francia to plot civil war. This came to a boiling point with The Nobles Revolt of 920 A.D. Captured and imprisoned, it was The Church who negotiated for his release.

Returning to Germany, Charles raised an Army to take back his crown and Kingdom in Francia. Captured yet again, this time The Church left Charles to his own devices. He died in prison in 929 A.D. Much overlooked, Charles The Simple was one of the only Frankish Kings to successfully negotiate (and live in peace with The Vikings). Subsequent invasions and wars would not be dealt with by other Frankish Kings, as they were by him. 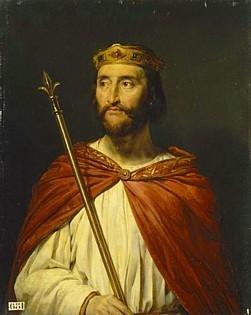