Dubbed by Historians as “The Reluctant Pirate”, Charles Swan's date of birth is unknown. As per Pirate “tradition”, when ships were captured, crews were normally given an option to join (or die). Charles was one of those who “joined” in the 1680s when his Merchant ship was attacked (although he stated he was forced). Eventually procuring his own ship and crew, he hit the Coasts of South America hard for plunder. Legend also states that Captain Swan wrote numerous letter to various Crown Heads of Europe “begging for pardon” (such a paradox!). He participated in the Pirate Raid on The City of Payta (Northwest Peru) in 1684. The Town was birned and razed and several hundred citizens were slaughtered – all for no loot being found. Fearing mutiny, Charles left the company of “The Wolf Pack” and headed for The Mexican Coast.

He was quite successful in attacking small towns there, until a Spanish counter attack drove him off (and cost him 50 men in the process). Heading out to The Pacific, Swan made several attempts at capturing various Spanish Treasure Ships (each time failing). He was able to capture a Merchant Ship The “Cygnet”. Taking the crew hostage, supplies got so low that his crew contemplated “eating” the prisoners! Fortunately for the hostages, Swan and his crew made The Isle of Guam (just in time!) While on Guam, Swan became friends with a local Mindinao Chieftain. Swan announced to his crew that he was through with the life of a Pirate. Splitting their small loot holdings, Swan was made an Officer in the Chieftain's army. In 1690, a Dutch ship made Guam. Swan decided he was finished with “native life” and escaped to the Dutch ship. He got half way to the ship before the Chieftain's warriors speared him thru – for deserting his men!. 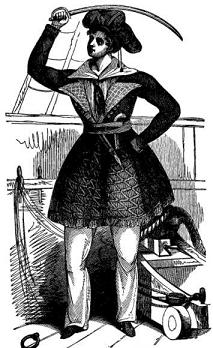