Eldest Son of King Chlotar I, Charibert was not supposed to rule. Having the “good fortune” of outliving ALL of his elder brothers gained his installment as King of France. Given a small territory upon his father's death to rule (Northwest France), Charibert married and had a daughter (Berhta). Her eventual marriage to Ethlebert of Kent would forge a strong Alliance. An illicit affair with a Nunnery Novice gave Charibert an illegitimate Son (which angered his wife). Secreting the child away, Charibert created a rift between himself and his Son-In-Law (Ethlebert). Divorcing his wife, he married yet again. Within the year, she too would die. After which, BOTH of his brothers passed. Their Kingdoms Austrasia and Nuestria fell to Charibert – now declared “The First”. Now “King” of over half of then “France” his past “escapades” alienated him from important Alliances and he lived until 621 A.D. - miserable and despised. 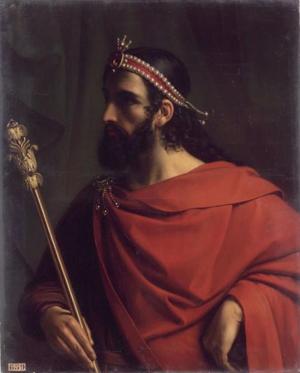