Another well known headgear popularly worn by Medieval Men, The Chaperon evolved from common origins. Originally made of heavy wool, they were available in many colors, dyed to "taste". A long (6 foot piece) of cloth was wound around the head (similar to a Turban). In the more common version a small section  extended off the side. In some Regions, this piece was also used as a scarf against the cold. Traced to the 12th Century, The Chaperon was adopted for Noble use around the 14th Century. These versions were made of much finer materials and were often embellished. The extension of cloth used as a scarf was now made longer and thinner. Known as a Liripipe, it became a form of "status symbol". Often higher crowns were wound (causing the length to extend to upwards of 8 feet in cloth to achieve this look). By the 15th Century most of Central and Western Europe had fallen out of favor with The Chaperon. It was still very popular in Italy and surrounding Mediterranean Regions up to the end of the 16th Century among Nobility. 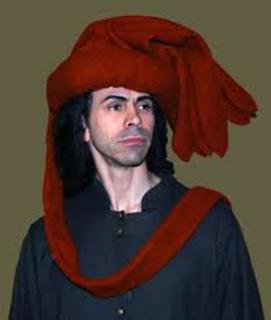