Another important Profession in The Middle Ages was that of The Chandler. In an Age in which electricity did not yet exist, the need for light at night was of tantamount importance. Prior to the development of Candles for illumination, Oil was used. This was expensive and often difficult to procure until much later in History (16th/17th Century). Early Candles were fashioned by hand. Using a length of “Wick Cord”, animal fat was the common ingredient. However, these early versions produced copious amounts of smoke, which proved to be quite uncomfortable in an enclosed space. These versions also burned far faster. Later, in the 12th Century – the use of Beeswax (taken or “Farmed”) from the insect. In liquid form, the Wick Cord can be “dipped” repeatedly. Allowed to dry in-between sessions (and repeated), a traditional Candle was formed. The Chandler (one who produced such devices), would next smooth out these.

Candles became a vast money making venture, first entered into by Religious Orders. Monks maintained their own Beehives for the dual production of both Honey (for food and spice) and Wax for Candle production). Most Nobles keep their own Chandler and Chandlery (Candle Production Facilities). This was seen as the height of “wealth”. A good Chandler could maintain a sufficient stock of Candles for at least 6-months before he and his Apprentices had to begin the process again. Some continued onward, keeping small store for them to sell themselves as a way of making funds.

Candle Makers would continue as a much needed profession form many hundreds of years. They became “extinct” due to that “marvel” of the 20th Century – The Electric Light. However, Chandlers still practice their Centuries old craft, yet today throughout The World. 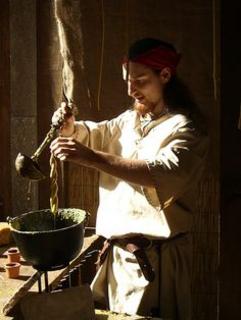