A Chancery was a derivative of the position of Chancellor – or a very important Medieval Era Office of State. The position required A Chancellor to mette out Justice upon hearing legal arguments – based of His authority as granted by a King or Queen. In addition, The Chancellor managed the day to day administration of His Office. This produced a wealth of written documents and decrees. Specially trained writers (Copyists), were employed and known as a Chancery. In addition to having an above average education (reading and writing) – which was unique for The Middle Ages, the occupation was also seen as a form of Secondary or Adjutant to The Chancellor. Dating to the 11th Century AD, the Chancery saw more increased responsibilities by the 16th Century. Many of their documents and rulings from their employing Chancellors still exist. 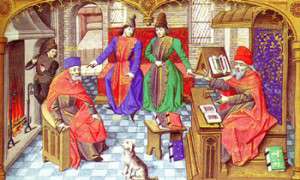