Seen in the 4th and 5th Centuries B.C. - The Chalcidian originated in the City of Chalcis. It was predominately used in Southern Greece Armies. Made of bronze (and weighing around 5 pounds), it was composed of three components. The one-piece cap (with back neck protection) and two side flaps (also of hammered bronze). The flaps were set farther back, thus exposing more of the face. A small attached Nasal Guard was incorporated as well. A leather lining was also installed for comfort of wear. There are several varieties of Chalcidian Helmets known. Some later Hoplite troops were known to still use this helmet type by the early 6th Century B.C. 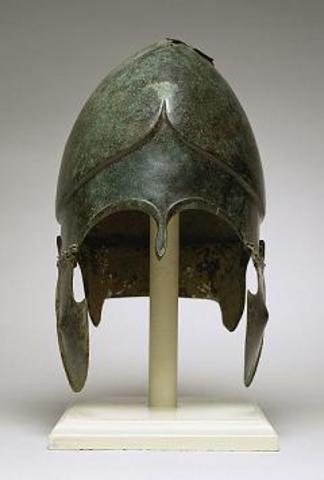