Theorized and developed in the 17th Century, Chain Shot was used mostly by Navies (but some documented cases are shown to have been used against infantry in the field). There were many different variations of Chain Shot experimented with. In design, 2 iron Round Shots were connected by a length of chain (normally 2 to 4 feet long). After a “primer pouch” was loaded in the cannon of choice, the Chain Shot was simply placed down the barrel (chains under or over the shot). Upon ignition, the shot would launch. Almost immediately, a spinning motion (which not always happened) – began, creating a “whirlwind of death” (as once described). Used for tearing ship sails and rigging, Chain Shot was moderately effective, but was hampered by problems with the supposed spinning. Often, the entire “assembly” would simply launch forward (without spin). Attempts to shorten (or lengthen) the chain was tried (all with the same effect, most times). Although it created “horrific” injuries, Chain Shot did not last long – giving way to the more practical Grape and Canister Shots. 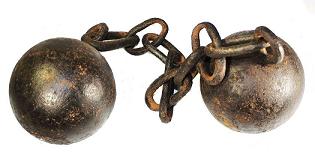