Another “weapon” debated by many Historians (who claim it was more used for “hand fighting”), The Cestus is another very iconic (recognized) piece of Ancient Roman history. Copied copiously on Roman flatware, pottery, wall, etc. - The Cestus is best described as a “Battle Glove”. Known to have been used by “unskilled” or “untrained” Gladiator's, the glove was actually leather strips that were filled with lead or rock, and sewn together. After creating a hand “pattern” of sorts, The Cestus could be worn and used much the same way a modern Boxing Glove would be used (with slightly different results, of course). Often, elaborate iron and copper studs would be embedded into The Cestus (to enhance the damage that the glove would do. In later variations, a longer sleeve of thicker leather was attached to provide some protection to the Wearer's forearm and upper arm as well. Considered a “Poor Man's Sport”, Cestus “betting” was very popular for a (brief) time. The goal was obvious. Batter to death your opponent to win. As stated, trained or “quality” Gladiators (and Candidates), were often NOT wasted in such a way. By the later part of the 4th Century A.D. - Cestus Fighting had been more or less abolished in Rome (but still could be found in it's Provinces). 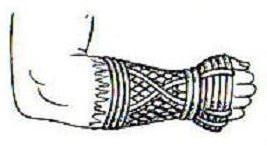