Located in Lombardy, Northern Italy – Cremona Cathedral's construction began in 1107 A.D. Completed in 1170, the Bell Tower is considered one of the largest surviving in Italy. The facade of Cremona features an impressive collection of Medieval statuary set in Exterior Aspes. Designed to hold over 150 figures, many have been damaged and not replaced. Also known for the 1310 statue “Madonna With Child”, it was the last such commissioned for completion by The Tuscany School. The interior of Cremona features many examples of 14th to 16th Century Religious Art. Still a functional Roman Catholic Archdiocese, Cremona Cathedral received little damage from the many Wars throughout the centuries, and is a popular attraction for Visitors to the Region. 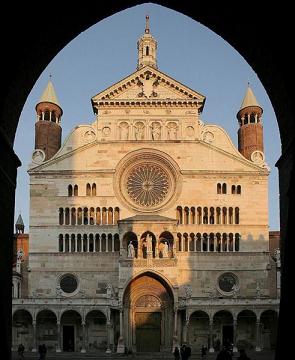