Another early Bronze Age Culture, as we have previously seen, The Celtic People were accomplished Warriors. They understood the importance of Armor in combat. Of the very few remaining artifacts of their Culture (1200 BC), their War Shields were both functional and works of Art. Typically, Shields were framed of wood. Animal hides formed the "body". Next, thin plates of Copper and Bronze were next affixed and hammered (shaped). Typically, War Shields were 4 to 5 feet in length and 2.5 to 3 feet in width.

Designed to offer as much protection to the User's body, War Shields could also be used in tandem with other Warrior's Shield.They were often highly decorated (mostly with Pagan Symbolism, as a form of "protection" in combat). Strips of attached hide (leather) was placed on the inside (rear), to allow for carrying. Strong, Celtic War Shields were elongated in shape. They were effective against both ranged weapons and heavy blade blows. 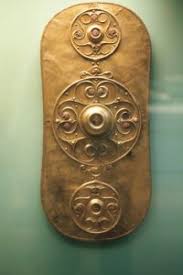