Originally born of the Civilian fashion of Headwear seen in the 17th Century, the so named “Cavalier” Hat was actually known as a “Slouch”. It’s nomenclature as such derived from The English Civil War. Supporters of King Charles (Royalists), were of Titled or Noble birth. As such the often flamboyant Civilian Hat style became the standard Headwear of such. They (as The Hat), became known as “Cavalier”. Worn by both Royalist Infantry, Artillery and Cavalry Officers, the very broad brimmed Hats featured a medium Crown . Made of semi-stiffened and pressed Felt, The Cavalier style was noted for large plumage, while wad affixed to the Crown base.  Colors and embellishments were as varied as were the “tastes” of their Wearers. The style was quickly adopted  (in a similar vein) in France, by the special Guards to The King, The Royal Muskeeters. Not lasting much past the 17th Century, The “Cavalier” Hat and style is still widely viewed as being representative of that “Gentlemanly” Era. 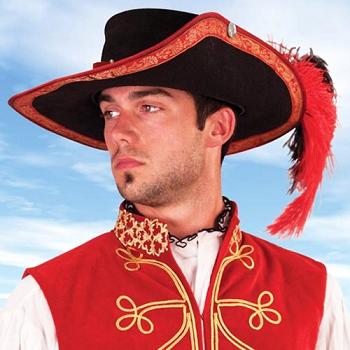