Castle Williams is a circular Fortress built between 1807 and 1811, on Governors Island - in New York Harbor. Name after the first Superintendent of The US Army Corp. of Engineers, Jonathan Williams - The defensive structure was designed to protect the Harbor from Enemy attack.  Castle Williams was constructed of sandstone and granite rock, and featured walls between 7 and 8-feet thick. It's 13 Casemates held a variety of Artillery pieces that protected both it's land and seaward approaches. The Fort was garrisoned from 1808 to 1840.

The mission of Williams was changed to support a Military Prison in the 1840s. By the start of The American Civil War in 1861, Williams held up to 700 Confederate Prisoners and some Political ones (primarily Spies and Aggitators like "The Copperheads"). Only Enlisted men were kept there, with Rebel Officers being held at nearby Fort Jay (in relative comfort). It was not the same at Castle Williams, where by 1863, Rebel Prisoners had barely a blanket. An outbreak of Measles in 1864 swept through The Prison, killing many.

After The War, Castle Williams was renovated and by 1895, was incorporated into The US Army Disciplinary Barracks System. It served in this role until 1965, when it was finally closed due to poor conditions. Turned over to the National Park Service, it was again restored and opened to The Public as a Monument in 2003. During The Civil War, Rebel Prisoners gave Castle Williams the unusual name of "The Cheesebox". This was due to it's resemblance to a cheese container box "tall and circular". The name stuck and was even referred to by thus name in the 20th Century. 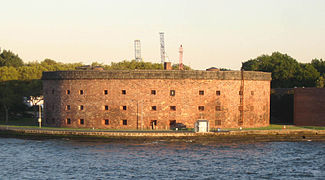