A former Tobacco Warehouse, “Castle Thunder” was located in Richmond, Virginia. Built several years before the start of The War, Castle Thunder's naming is lost to time. Some think that a former owner whose last name was Thunder was the reason. What was not lost to history, was the infamous nature of Castle Thunder. Unusual in the case that as a military “prison”, it's “Guests” were Political prisoners, possible spies and so-named Traitors to The Confederate Government – the Prison was well noted for the cruel and barbaric treatment of it's prisoners by it's Guards. Although food and supplies were given (more so than most Rebel Prisons), Guards would often steal these rations for their own use. One of it's most famous Prisoners was Dr. Mary Walker. She was one of the first female Surgeons in The Union Army (although she held no commission as an Officer – she volunteered!). She saw “service” in several of the worst battles of the war before being captured and sent to Castle Thunder (she is also the only woman in US History to date to be issued The Congressional Medal of Honor). She was exchanged in 1864 (for a Confederate Surgeon). Confederate President Jefferson Davis (upon receiving reports of Confederate prisoners being hung in The North), said “For every one of Ours, I will hang two of theirs!” Castle Thunder was “chosen” as the location to carry out his threat. Davis (obviously preoccupied with The South losing The War) – never carried out any executions from Castle Thunder. Castle Thunder's Prisoners were freed by Advancing Union Forces into Richmond in 1865. The Facility caught fire and was burned down during the destruction of The City. 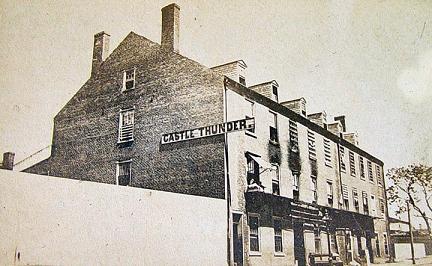