Located near the Village of Castle Rising, Norfolk, England - it was built in 1138. It is part "castle and part hunting lodge", as described by Period sources. It was inherited by Queen Isabella (France), who lived there after her fall from power in 1330. After her death, it was willed to Edward, The Black Prince. In the 15th Century, Castle Rising was more well known for hunting than as a military structure. Unused for decades, by the 16th Century, it was a complete ruin. The Crown sold it to private ownership.

Through the centuries (and many owners) Castle Rising was slowing restored back to it's late 10th Century appearance. Composed of 3 Baileys, each has an earthen breastwork for increased defense. A Keep stands in the central interior. It has been speculated that the Keep was designed after Norwich Castle. Castle Rising is an excellent example of a Norman defensive structure. Although many interior structures have been lost to the ages, constant renovations have been done to keep it at it's current magnificent state. It can be visited. 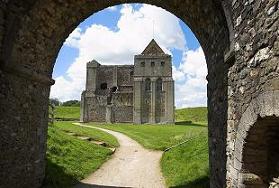