Developed for artillery emplacements and as components for Device Forts, Casemate's were enclosed protective structures (made of stone and later steel). They are sometimes referred to as Vaulted Chambers. The name derives from the Italian word for “Casa” or “House”. Normally built under a Rampart, Casemates were designed to be impenetrable (therefore troop supplies could also be stored there). Various openings for guns were built to give varying types of radius swing of firing abilities.In Coastal Defenses, Casemate's were sometime free standing structures. For Naval terms, a Ship's “Casemate” functioned much the same as it's “land Cousin” - in that (while they were made of reinforce iron or steel), they allowed Ship Gunners and artillery a measure of protection. Ironclads and related armored ships all featured a form of Casemate system. 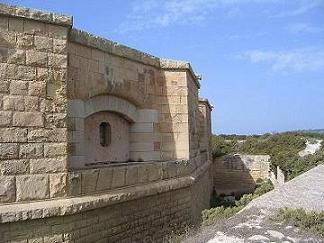