With prior to the 1950s, the term ''Cartouche'' was unknown (identified in Ancient Egyptian writing or Hieroglyphics as a ''Serekh''), the link in Modern explanation is that a Cartouche is a carved Oval image with a direct Line underneath. Inside this image was writing (again in imagery), of a King, Queen or Royal Family Members ''NAME''. The development of such would be related (many Centuries later) – to the European Signet (or Monarch Insignia).

Origins of The Cartouche are traced back to The 3rd Dynasty (''Old Kingdom'' 2,686 BC). In addition to being found on Royal Tombs and ''Achievement'' Carvings, Cartouches were fashioned into jewelry, worn only by a Pharaoh, Queen or related. Such jewelry was even taken into their Tombs (Mummies). It was thought that the very NAME of a King or Queen was protection from ''Demons in The Underworld'' (tasked with keeping The Royal ''off His or Her Path to Judgment by Anubis). 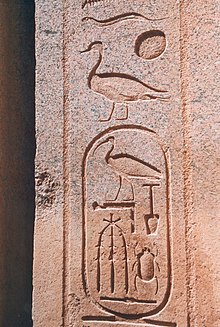