A somewhat necessary Medieval Job Occupation, a Carter was often a self-employed Position. A Person with “means and ability” could build a strong Cart and (if they had access to Oxen and later Horse) – could make a “living” hauling Goods and Merchandise, for a set Fee (and later a Profit). Although not indicative to The Middle Ages, A Carter would become a popular method for Peasants to generate self-income. Carts were made of wood and designed or patterned on the particular Region of manufacture, Although originally a 2-wheeled transportation device, 4-whhels were preferred for better load distribution. Oxen were seen as a fair better “haul animal”, due to their strength. Carts also featured removable or fixed sides and some also have coverings or roofs.

Normally being contracted by an Official (Nobleman) or related, The Carter would transport goods such as food stuffs or often be contracted for a Fee to a Merchant. They would haul good for sale from Shire to Shire. The Carter was also responsible for bringing back traded or bought goods. At one point, The Carter was vital to a Medieval Economy. Some Nobility hired their own Carters for their express use. These were often under protection of The Noble and were accompanied by Soldiers for the protection of the goods or foods being secured (from Bandits and Outlaws). Although the technology of transportation would make the use of Carts and Carters obsolete very quickly in History, they would nonetheless remain an important and reliable fixture in many Cultures. Even today, they can still be found in some European Countries. 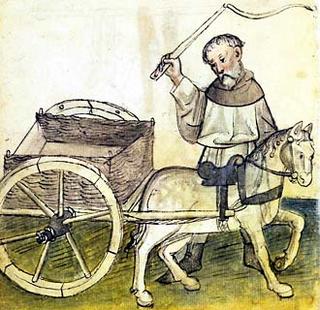