First documented around the 10th Century (in Milan and Florence, Italy), they were considered “War Carts” Made of reinforced heavy wooden timbers, they could be 15 feet off the ground. The Cart (mounted on 4 massive wheels – each roughly 6-feet in diameter), could be built with several layers. Often seen as a primitive early “Tank”, with the advent of Cannon, often small Swivel-type (3-pounder) cannon were mounted on the “Upper Deck”. They were used as Mobile Archery Platforms for Archers and Crossbowmen. Smaller carts were often assigned to The Carroccio Cart, and were made to carry “Bells and Trumpeters” to relay signals in combat. Later, in many of The Medieval Italian Civil Wars of the 15th Century, flags were mounted to these smaller carts (again as a form of battlefield communications). Often religious symbols were placed on The Carroccio Carts as a form of “religious propaganda” against one's enemies (especially in the many Catholic/Protestant Wars). Often weighing several tons (even without troops), it would take as many as 6 to 8 Oxen to pull these “War Wagons” in combat). 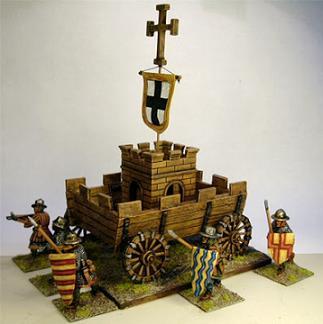