The  2nd Century BC Carnyx was a wind device, somewhat on par with a War Trumpet – adopted and used by The Celtic Tribes of ancient England, Wales, Scotland and parts of France. Made of brass, The Carnyx was somewhat standard at 5-feet in length. Hollowed, the Staff narrowed and widened to create an unusual noise when air was blown into it. Roman Chronicles tell of a “high pitched, screaming cry’’ which may been on par with an Eagle screech. The purpose of The Carnyx was to not only rally soldiers in  battle, but also was a form of early psychological warfare. The sound (especially to untrained soldiers), had a particularly “terrifying” resonance.

Used much as a modern Horn instrument, some Carnyx had curved or fluted ends which served as mouthpieces. The “Bell” or opening at the top often portrayed a Wild Boar sculpture or other beast associated with Celtic culture. The Carnyx also served as a crude form of Battle Standard, along the same lines as the late 4th Century AD Roman Draconarius. The Carnyx was used well into the 2nd Century AD. Although only fragments of Carnyx were ever found, in 2012 an almost complete version was uncovered in France. 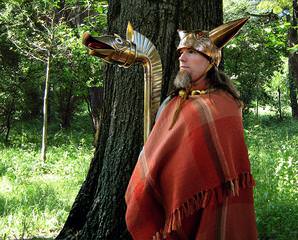