Carlotta Thompkins, better known in the annals of The American West as ''Lottie Deno'' was a well known Gambler and Confidence ''Artist''. She was known by MANY nicknames such as ''Mystic Maude'' and The ''Angel of San Antonio'' (all of which served Lottie well).

Born in Warsaw, Kentucky in 1844, Lottie was from a ''wealthy'' Family. The Family ''secret'' to it's wealth was no real ''secret''. Lottie's Father was a Professional Gambler and Race Horse Breeder of some renown. Lottie would often accompany Her Father on his ''Business'' deals (which would wind her up in ''upper Class'' Saloons and Gambling Houses. Lottie began to learn ''The Game'' (both that of Card and other gambling revenues).

The American Civil War of 1861-1865 was particularly hard on Lottie. Her Father went off to serve for The Confederacy and was killed. Soon, Lottie ran pout of money. She turned to the only source she could – gambling. Although young (in Her teens), she was taken care of by Her Nanny (Slave). This ''Nanny'' was quite ''well educated and stood close to 7-feet! She served as Mother and Bodyguard'' (it was claimed).

In 1865, Lottie ended up in Texas. She met and fell in love with fellow Gambler Frank Thompkins. The two earned a reputation as ''cunning'' Players, NOT to be taken likely. No doubt the very attractive Lottie was able to make most of their games and confidences ''work'' well.

Frank was accused of murder (related to gambling) and had to flee Texas. Lottie worked Her way around the West, reportedly meeting some of The West's most famed (and infamous) Gunslingers, Lawmen and Gamblers. She was was even ''close'' to one Dr. John Henry Holliday (better known as ''Doc'').

Finally reuniting in 1877 (Colorado) Lottie and Frank made their ''stake'' again with the flourishing Cattle Drive. Many Cowboy Drovers (paid in full at the end of their Drive) fought refuge in Saloons and Brothels. Lottie and Frank ''cleaned up'' in The Saloons and Gambling Houses.

In the 1880s, perhaps by means of ''settling down'' Lottie and Frank brought their own Gambling House and later Restaurant (New Mexico). Their ''wild life'' was ''put to bed'' when a by now ''upstanding'' Frank became Bank President. Later He and Lottie also founded The City of Deming's first Hospital.

Lottie outlived Frank and died at the age of 89 in 1934. Lottie's personage would live on however. Well known to many, it was Lottie that a well known Radio and (later) Television character was based on - That of Miss Kitty Russell, Owner of The Long Branch Saloon from ''Gunsmoke''. 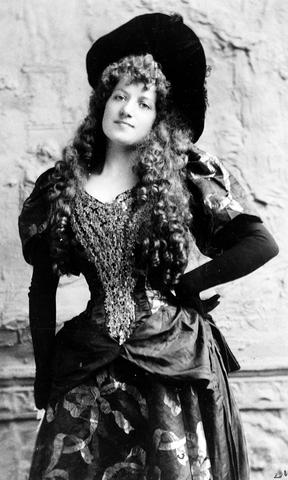