An Artillery Shell (Round), somewhat unique in design, The “Carcass” Shot was developed and first deployed by France in the early 17th Century. The Round is credited as being the first true “Incendiary” Shell and further – one of the first Chemical Artillery Rounds used in War. The unusual name of “Carcass”, was given for the curious appearance of the Shells interiors. Composed of two “plates” which were actually  hollowed, semi-circular Balls. Cast in iron, each component featured a series of opens (circular), drilled throughout. Each piece was joined with noted rope, in which the knot extended out side of the Shell. One such opening contained the Slow Fuse. The interior of the Shell was filled with Nitre, Sulfer, crushed glass and other noxious chemicals (turpentine and raw Pitch being favored). The multilevel rope connections “crossing” as they did, resembled the rib cage of a Human, hence “Carcass”. Upon being fired (from larger Bored Cannon), they would explode over Enemy Positions or within Fortifications. The resulting detonation caused fires and the expected Shrapnel. In consequence, the fumes produced by some of the “ingredients” were noxious and an irritant. Carcass Rounds were better known for their deployment during The War of 1812, when The British Navy fired hundreds of them into Ft. McHenry – scene of the “birth” of America’s National Anthem, “The Star Spangled Banner”. 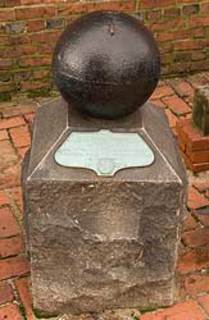