The Caracole tactics was developed in pace with the developments of early firearm and their deployment with Mounted Troops (Cavalry). Seen as early as the 17th Century, by the 19th Century, The Caracole was the predominate Cavalry tactic used by most European Armies. With the obvious slow decline in Swords and sabers as the primary Cavalry weapon, in favor of firearms, a tactic was needed in which a formation of Armed mounted soldiers could deploy effective against and enemy without dismounting. In practice, a typical "detachment" of 65 soldiers, were arranged in 5 Ranks of 13 Troopers each. Advancing "en masse", the first Rank advances several Hundred feet. Turning their horses at a slight angle (Left or Right). The Rank (properly positioned), fire (mounted) - into the enemy. Quickly turning (wheel), to either Left or Right, they proceed at the "fast trot" to the Rear of the Formation. The 2nd Rank duplicates the action (and so on). In essence, the Caracole was a form of "mounted" Volley Fire tactic. Used with great success by all sides during The Napoleonic Wars, The Caracole tactics would fall into disuse due to the advent of both the Rifled Barrel developments in both small arms and cannon. 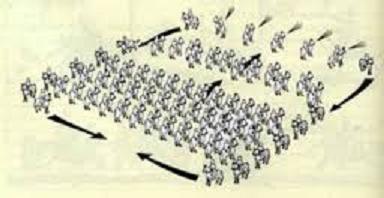