The Capstan was a mechanical device located on a Ship Deck that was used to apply force to move ropes and cables. It was a vertically placed, rotating axle machine that required a minimum of 4 “able bodied” Crewmen to operate. Moving in a circular (round) pattern, Crewman manipulated The Capstan via a series of detachable Spars or Poles. Additional Crewmen standing aside, would pull the primary Guide lines, positioning them in such a way as to not snag the specific moving lines.

From The French term “Capestre” or “Pully Cord” – The Capstan was a wooden constructed machine set normally Amidships (or somewhat Centered of a Ships Main Deck). It’s rotating components were placed well below Decks. The primary ropes  needed to manipulate larger Sail Patterns, were wrapped around The Capstan top. Crewmen pushing The Device, created the movement needed to move said Sail Pattern into it’s desired position. Such work was “back breaking” and often tedious (for it could take MANY turns of The Capstan to initiate the required “Pattern”).

From it’s earliest uses around the 15th Century to the late 19th Century, Sailing Ships (both Military and Merchant Vessels), operated as such. With the evolution of Ship Building, early “true” mechanical versions (steam operated), were invented. The end of The Age of Sail eliminated the nedd for the “Capstan Detail”. It should be noted, that The Capstan work Crews were responsible for the creation of “Capstan Songs” or “Work Shanties”. These were vocal “songs” (or Cadence) used to maintain rhythm and speed of turns while working a Capstan. 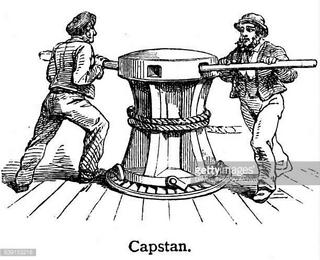