An Ancient Military offensive Tactic, The Cantabrian Circle was named for it’s development in the 1st and 2nd Century, Cantabrian Wars of Ancient Rome. The tactic involved either the used of Javelin throwers Mounted Archers. This Formation of predetermined amounts, would form a “rotating” or moving circle pattern  (normally 1 Rank or File deep). The Formation would constantly move so that each Archer or thrower threw or fired their weapon into an Enemy. In essence, this created a “continuous fire”.

An exact circular pattern was not necessarily needed. As such of the continued fire, The Cantabrian Circle was very effective for Rome in The War. This tactics  is often associated with The Parthian Shot. Although examples of The Cantabrian Circle were used in The Middle Ages (especially The Hundred Years War), it quickly disappeared with the adoption of Gunpowder weapons. 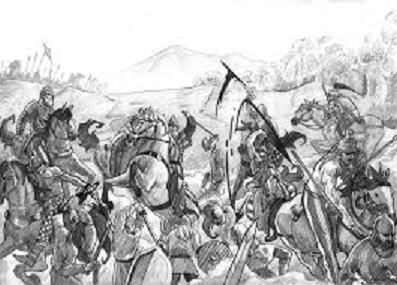