Originally created for use in British controlled Canada in the 1750s, The Provincial Marine was a form of Coastal Guard, under command of The British Royal Navy. They were active during The American Revolution as a means of defending Canadian territorial waters along the common Border between the recently formed United States, in The Great Lakes. At their height of deployment, The Provincial Marine consisted of (13) various types of Vessels. Such a ''hodge podge'' of Ships, they were known as The ''Tin Pot'' Navy by British Sailors. On average, a Provincial Marine Ship was around 45-feet in length and carried between 6 and 10 Cannon. Crews were a combination of serving British Sailors and Officers along with Canadian Volunteers. Towards the end of The American Revolution (1780s), The British Navy attempted to bolster The Provincial Marine Force with several British 4th and 6th Class Sloops and Frigates – but this deployment was ''too little, too late'' to be of any effective military effort.

The Force was largely abandoned until The War of 1812, when once again it was activated by The British Royal Navy. Force Ships participated in 5 major engagements of that conflict (long The Great Lakes). Later again they would be pressed into service during The Fenian Revolts of the late 1860s. Active until 1910, The Provincial Force would be converted into the earliest form of The Canadian Navy. Today, the linage is tied to The Canadian Coast Guard.

The original Colors of The Provincial Marine Force were The British ''Red Ensign'', which is a Red Field in it's entirety. The Upper Left Canton bears The British Union Jack. Off set from the Field Center, was the Heraldic Crest of early British Canada. 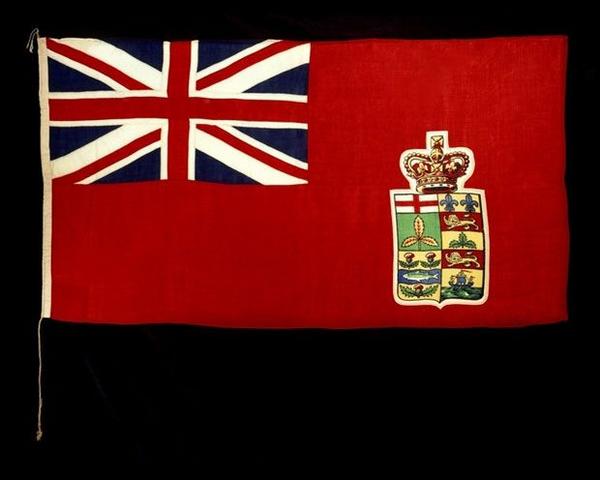