''Camp Douglas'' was at one point the only Union Army operated Prisoner of War internment facility in the early years of The American Civil War (1861-1865). Built on the outskirts of The City of Chicago, Illinois in 1861 – the Camp at one point held 10,000 Confederate Prisoners. And while conditions in Union Camps were far better than those in The Confederacy (South), The Camp was never designed to support more than 1,000 soldiers. As such, with most medical supplies going to The Army, many captured soldiers died as a result of disease and poor nutrition. Over 4,000 would die and be buried at Camp Douglas until 1865 (The Ear's end). New Prisoners were re-routed in the last year of The War, and Camp Douglas served as a mustering out point for Union Soldiers. It's wooden containment fencing and housing for The Garrison was torn down in 1865-1866 – with the remains of Confederate dead removed to a nearby Cemetery. Now Apartments cover the entirety of Camp Douglas, but plans for a Museum remembering The Camp have been in development since 2010. 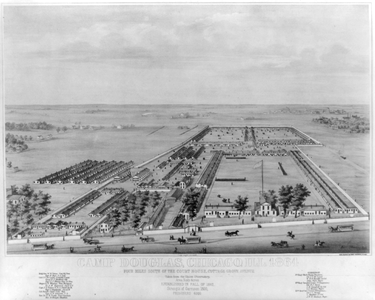