Perhaps one of the oldest forms of “Cavalry”, the Camel is an Animal well suited for survival in the hot and water-lacking Deserts of The World. Their use as Cavalry is thought to have originated as early as 853 BC at The Battle of Qarqar – during The Assyrian conquests of Aram (a Confederated Army of as many as 11 Nations). The overall agility and control of the beasts as a “Shock Force”, broke the Confederated Lines of Infantry. The Animals ability to store and conserve it’s own water, made The Camel an effective “tool” in Early Warfare. Although Horses were known and used, the natural aroma of The Camel is somewhat repugnant to them. As such, Horses will bolt and run in Combat, Hence another reason for The Camels in Combat.

In addition to it’s “smell”, The Camel was an even more effective platform for Javelin Throwers and Archers. The height of The Animal allowed for Archers and related “Missile” Troops to fire down onto an Enemy. The Muslim conquests of The Middle East (even into The Crusades Period) – were greatly enhanced by Camel “Cavalry”. Even in terms of “Modern” Warfare – The Camel was seen as an important component of Military Operations in a Desert environment. French Ruler Napoleon Bonaparte deployed hundreds of Camel Cavalry Regiments in his Offensives in Egypt and Syria between 1798 and 1801. In some cases, even specially created Camel “Armor” (much as was used for Medieval Horse Warfare) – was created to protect the Animals. Most European Armies that were involved in Desert Conflicts in the 19th thru 20th Centuries adopted some form of Camel Corps.

Attempts to adapt The Camel for Warfare outside of The Middle East was attempted many times. Fodder (feed) for The Camel was easier to acquire for the Animal than for The Horse. In mid-19th Century America, during The Civil War of 1861-65, The Federal Army briefly experimented with the breeding and deployment of The Camel in The American West (as a possible augmentation to The Cavalry Horse). An actual “Regiment” was raised – but it did not see Combat and lasted only several months. The development of Light Artillery (The Zambarak), was also invented in the early 19th Century – which could be “mounted” to The Camel (creating a form of “Mobile” Artillery). Although not widely used, when this tactic was deployed – it was very effective (as has been previously discussed). The use of The Camel would become even more important to Arab-British Operations during World War I, against Turkish and German Forces in The Middle East (“Arab Spring” Offenses of 1914-16). Even today, although somewhat antiquated by "Modern" Military standards, many Middle Eastern Armies maintain Camels for Desert Patrol work. They can still be seen as an important part of Ceremonial Parade functions with many "Desert Nations", harkening back to a by-gone Age of "Camel Cavalry". 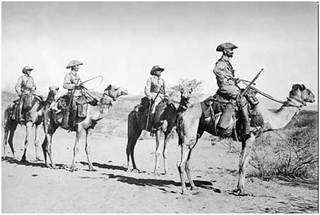