A defensive device which would be carried by ground troops and designed to injure infantry or mounted troops. The device was an early example of an "anti-personnel weapon". The Caltrop goes back to the times of ancient Rome. Constructed from iron or related metal, it consisted of 3 to 4 prongs inter-connected in such a way - that they could stand on their own (star-shaped). With one or more prongs facing outward (and upward), they would be placed on the ground or concealed. An unwary horse or foot would step on the Caltrop and sustain serious injury to either a hoof or foot. Caltrops were popular during the Crusades on both Christian and Muslim sides. Their simplicity and effectiveness would last well into the 20th  Century. 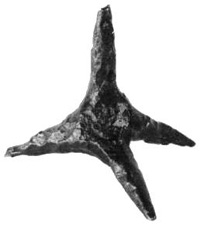