Seen in 1850, The McChristian Flag was part Militia Flag and part Political Party Flag. Designed for use by James McChristian (a former Mexican-Californian Emigrant of The US), with The Mexican War came many “Colonists” joining in to help American Forces capture California (and therefore, like earlier Texans) – declare their “independence”. These “Patriots” actually wished to form their own “Republic” (but not necessarily become a US State). The Bear Flag was raised by such an armed Militia. The unique “Colors” show an 8-Red, White and Blue Striping on the entirety of the Flag Field. In the upper left Canton (which was White), was an “inverted” 5-point Star (in Red). In the lower right portion of the flag was an “additional” Canton (also White”, which featured a Brown Bear (the symbol of California). 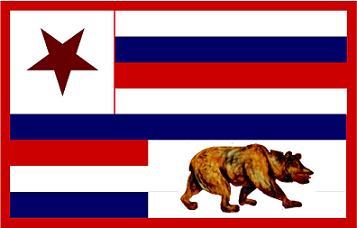