Calendars were used during The Middle Ages for both a practical and religious purpose. They were seen as a method to remember important religious holidays and when to properly plant and harvest crops. Many important “Holy Days” in all 3 Religions (Christianity, Islam and Judaism) – had to be carefully calculated. Many Families began to use them to mark important “personal” matters (such as Births and Deaths observances). Christians used the Calendar of Ancient Rome named “The Julian Calendar” (after Emperor Julius Caesar). His Reign was “fixed” at 1 B.C. (or more commonly today, B.C.E.)

The Julian Calendar is a Solar Calendar in that a “year” is measured by The Sun and an arbitrary number of Months are “assigned” to an arbitrary number of “Days”. Since The Sun returns to it's exact position in the Noonday sky every 365.52 Days, Months will have a varying number of Days with an adjustment or “intercalation” (a Leap Year). This is done to bring the Calendar in synchrony with the Seasons. Muslims and Jews use a “Lunar Calendar” (based on The Moon and it's “”Phasing” of 29.5 Days). The Jewish Calendar uses a “Leap Month” intercalation (while The Muslims do not). The Muslim Calendar uses a 19 year “alignment” cycle with a Solar Year. Great skill was needed to calculate them properly. In terms of a “New Year”, this was hotly debated in The Middle Ages.

In Christianity (and The Julian Calendar), Ancient Rome used January 1st as the “start” of it's “Civil Year” (for records keeping). This would be adapted into “Christmas Year” or “Anno Domini” (“The Year of Our Lord”) - to separate it from Roman Paganism. Therefore, early Middle Age Christians “identified” December 25[sup]th[/sup] as the “start” of a “New Year”. This was “codified” into early Calendars by Bede The Venerable – and was observed throughout early Europe (except in Spain).In the 9th Century, two Calendar Systems developed. The first was “The Pisan” System. Used by The Holy Roman Empire, it identified with “The Christmas Year” System (Jan. 1st) but had highly “movable” religious holidays (Feast Days).

The second was “The Easter Calendar”. This first established Easter as the “First Day” of the Year. Later amended – it would change to “Annunciation Day” (March 25th) as the start. This Calendar was used throughout England, France and Germany. This however, all changed yet again with Pope Gregory XIII in 1582. He devised a Calendar that bears his name – “The Gregorian Calendar” (now the standard in date keeping). Many Countries refused to recognize (or change) and The Julian Calendar would continue in some Countries for centuries. Calendars were considered works of art. They were hand-made (and painted), often reflecting a religious tone. Along the same lines as creating an “Illuminated” Manuscript, the average person could not afford one. Most Churches had a “Public Calendar” for use inside. Most of the wealthy maintained a Calendar (often inside elaborate frames), which were prominently displayed. 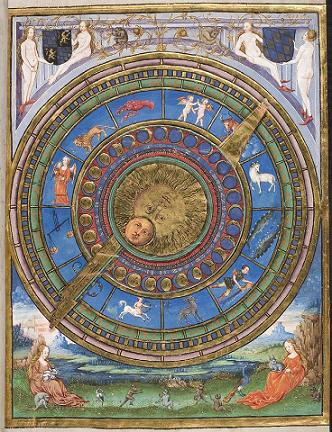