Built near the Town of Cahaba, Alabama (a river settlement not far from Selma) – the site was also known as “Castle Morgan” by locals. Built and opened in 1863, Cahaba Prison was an entirely wooden enclosure. Built to contain Union soldiers captured by Rebel Forces, the facility was considered small (built to hold 500 men). Originally built as a Cotton Warehouse (due to it's proximity to the Cahaba River), additional structures ans a large Stockade was added. In 1864, General (and future US President) Ulysses Grant, suspended the practice of prisoner exchange. Cahaba grew in population to 700 (in close living conditions). By the end of The War (1865), some 3,000 were placed there A Lt.-Colonel and Captain were in charge of the facility and Guard Force.

The Commandant (Colonel) was a drunkard and tormented the prisoners at all chances. The Guard Captain was known as a kind and understanding officer (who treated the prisoners as well as possible). Often, the two Southern “Gentlemen” would fight over the conditions in the Camp. It was known of at least I execution at Cahaba Prison. Several Union soldiers were caught attempting to escape (one officer, one enlisted man). The enlisted man was shot. The officer was thrown into “solitary confinement” without food. During a “work detail” outside of The Camp (the prisoners were used regularly for such) – the officer was shot and killed while “trying to escape” (although that was the official story!). Although poorly treated, the Camp had a low mortality rate.

Only 200 were known to have died in custody. Unfortunately, the soon to be “liberated” prisoners (due to the end of The War), would become better known to history, for being on board the Transport Ship S.S. “Sultana”. The story (which happened on the day Lincoln assassin John Wilkes Booth was killed (1865) – ergo little press coverage), was tragic. Some 1,800 prisoners were finally liberated by Union Forces. Placed on the Transport “Sultana”, they were heading to St. Louis Missouri (for care). The “Sultana” blew up while underway. All of the 1,800 prisoners were killed (or drowned) as were several hundred other passengers. Considered an act of sabotage by many, others think it was a “load” of Confederate “Coal Torpedoes” put into the Boilers of the ship (explosives designed to resemble lumps of Coal).

Time and the local Citizens dismantled and erased Cahaba Prison from history. History and time also erased the Town of Cahaba, which (by 1903), died out. It is a Historic Site (due to once being the Capitol of Alabama briefly, in 1818). The empty streets still exist as do some (few) structures. It is considered a “Ghost Town”. 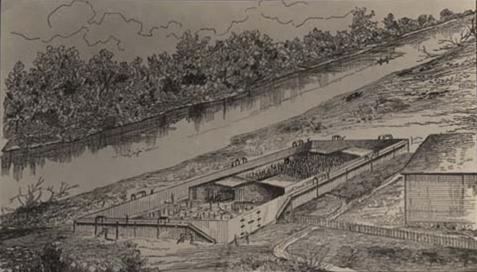