Located in Somerset, England – Cadbury Castle is an ancient defensive structure that many associate with The Arthurian legend of Camelot. Possibly a 3,000 year old (B.C.) Bronze Age “Hill Fort”, it was built into a geographical plateau feature. Occupied by Roman Forces in the 4th Century A.D. - it later served Norman conquerors. Ancient evidence of Roadhouses and wooden Palisade defensive walls with extended along the various plateau levels have been discovered from these Eras. Said to have served as a “Nobles Residence” (based on evidence of a Great Hall and other interior structures), it served as such in the early 9th Century. Some form of defensive structure has occupied the area. The site was an excellent location for such (rising some 500 feet above the Region). A natural defensive line of trees and forests have also served to protect the lower portions of the Hill Fort/Castle. Evidence of earthworks and related structures appear to have been incorporated into this as well. Any possible evidence of a “Great Castle” is sketchy at best. Large amounts of stone have been discovered on the plateau. Carved (or fitted), it may have well been a “Regional” structure of “great importance”. Locally (starting in the 13th Century), legends and rumors of King Arthur's famed Castle “Camelot” began to develop. Some fell that the impressive size of the flat and commanding plateau (along with clearly ANY structure built on top) may have fostered this. However for some reason, rebuilding of a proper Fort or Castle from the 13th Century onward was never entertained by any King or Queen (which is seen as strange). Cadbury still yields much in way of historical evidence even today of early Bronze Age and later Roman artifacts. 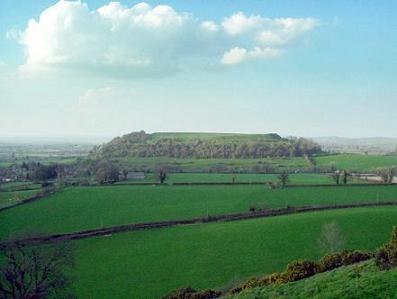